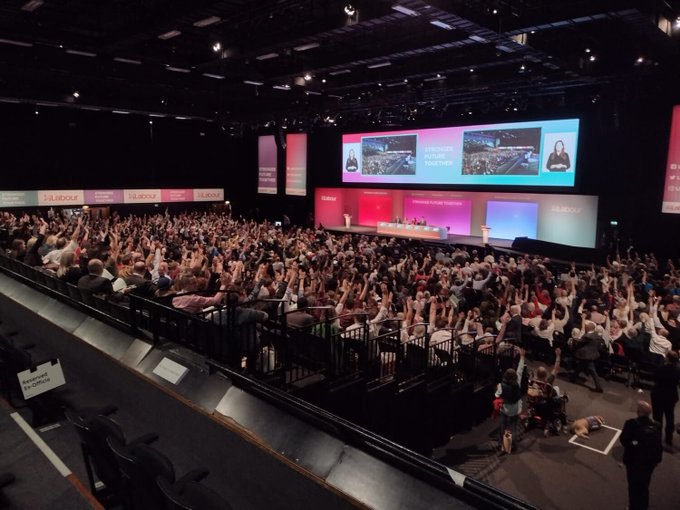 On 27th September, delegates representing 80% of Constituency Labour Parties voted to commit our Party to a proportional system of election to the House of Commons. All but two of the speakers at the debate were in favour of the motion. Delegates leaving the Conference Hall were telling us that they had been ambivalent about the issue before the debate, but once they had heard the arguments they were convinced that only an electoral system that enables every vote to count would give us the progressive Labour-led governments we need. This is what Conference is all about – to debate policy issues and to exercise our ability as a democratic Party to create our political platform together.

It is now clear to everyone that the Labour Party membership as a whole supports proportional representation. We also know that that support extends from South East Cornwall to Caithness Sutherland & Ross, from Liverpool West Derby (Labour’s “safest” seat) to Wokingham (the most Tory seat), and from Labour to Win to Momentum.

Three of the biggest trade unions voted against our motion, and because the two other big affiliated unions abstained, it was those three unions, representing 95% of the affiliate votes cast, that outweighed the 80% of constituency votes. Some people have asked questions about how the 50-50 split between constituency votes and affiliate votes works, and whether abstention amongst the members of one section should reduce the percentage accorded to that section. I believe there is some validity in that – if half of the affiliates decide to abstain, it would make sense to accord half the weight to the votes of the remaining affiliates. We can legitimately question the rules. But criticism of the Unions themselves is misplaced.

The GMB debated electoral reform and reaffirmed their union’s support for First-Past-the-Post. That doesn’t mean we can’t engage with them and seek to help them change their minds, and we will certainly try, but it would have been wrong for the union to vote against their own agreed position.

Unite had no opportunity to develop a fresh policy position before Labour Conference as a result of the pandemic. Unite opposed AV at the time of that referendum – a beauty contest for Nick Clegg and nothing to do with PR of course, but the agreed position of the Union nonetheless, which could be taken to indicate the Union’s position on PR. Since then, Unite’s delayed policy conference has debated the issue properly and come out decisively against First-Past-The-Post. Unite is now working with it’s membership to discuss and define an electoral system that will work best for their members and for the country.

Unison and the CWU abstained, because they did not have an agreed policy of any sort on this issue. We need to ensure that these two Unions, in particular, are encouraged to consider all the reasons why we believe that PR is essential in order to deliver governments with the right policies for working people, and we have already heard from Unison branches that they will be promoting motions on PR at the Unison conference.

The past 18 months has been difficult for trade unions and difficult for democracy. The triple whammy of the General Election result, leading to increased Tory repression of union rights, the multiple General Secretary elections, and of course Covid, have made it almost impossible for them to discuss PR since 2019. This is now changing. With 83% of Labour members in favour of PR and only 17% of the wider population opposed to it, it is safe to assume that the majority of union members also support PR, and that is certainly what they were telling us as they came out of the

Conference Hall. Neither the Labour Party leadership nor the leadership of the major unions can ignore the views of their members, and they have no vested interest in doing so.

We have a huge opportunity here – the biggest Union is now supporting us, and the fact that two of the other biggest Unions abstained on the vote shows that they are open for persuasion, so long as the case is made. That case needs to be not just that it benefits the Labour Party, but that it is in the best interest of trade unions and their members as well.

We’re not going away. We will continue to speak to Constituency Labour Parties, to ensure that all the members of our Party understand what we are trying to do and can work out for themselves the importance and benefits of electoral reform.

And we will spend the next year talking to the unions and their members at every level. We should be pushing at an open door. Trade Unions need a Labour government that will restore legitimate negotiating powers stripped away by Thatcher, Major, Cameron, May and Johnson. But they also need the continuity of government policy that PR will bring, so that the gains we make in the next Parliament are not then removed by the Parliament after that. The UK has a government that doesn’t believe in working people’s rights, or human rights, or any sort of rights. It’s time for the unions to join us in rescuing democracy and bringing to an end the era of doctrinaire right-wing politics.

About Sandy Martin, Chair of LCER

View all posts by Sandy Martin, Chair of LCER →