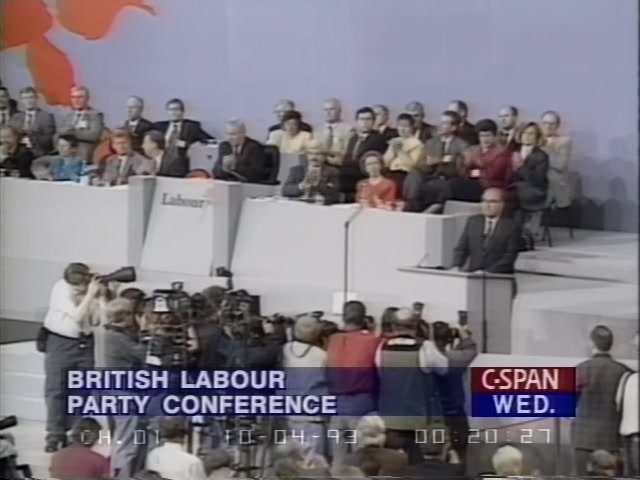 Once upon a time, thirty years ago to be precise, also at Annual Conference, the Labour Campaign for Electoral Reform won a victory which should be remembered and celebrated. We were 11 years into our wilderness.  We had just lost three general elections, unlike the present four.  Margaret Thatcher was still prime minister.  We were writing our next manifesto, like now, choosing devolution of our highly centralised state and Lords Reform to demonstrate the lack of democracy.  We had to find voting systems for putative devolved assemblies, Senate and to ditch first past the post for elections to the European Parliament.

Labour decided to set up a committee to decide what systems Labour would back but excluded in its remit the way we elect MPs.  Much has changed but the need to adopt a new voting system to elect MPs is still with us and the reasons stronger than ever but that was not on the agenda.  Roy Hattersley was our Deputy Leader, an opponent of electoral reform, had sought the assistance of the academic, Professor Raymond Plant.  Apparently he asked him whether he knew anything about voting systems.  The tried and test British way to such appointments is to say “No”.  Thus it was when Cyril Radcliffe was asked if he knew anything about India before being drafted in to design the partition line between India and Pakistan.

LCER went into the 1990 conference with considerable experience of sending out model resolutions, getting them adopted by constituencies, even unions, meeting with delegates before compositing meetings, and working out model composites.  That year, the minimum ask was to include elections to the House of Commons in with the Lords and Assemblies in the remit of the working party. Local government was left out deliberately as there were more Labour councillors than Labour MPs.  This might have been a mistake in retrospect.

We briefed the journalists that this was the beginning of the breakdown of Labour’s joint support with the Conservatives of the current voting system.  Everything went to plan except the vital words in the model composite had been left out.  However, because we went on emphasising the intent rather than the actuality of the composite when we won massively no one noticed.  The Commons was in!

The debate itself was a master class in arguments for electoral reform.  Only one delegate against was chosen by the Chair, Tom Sawyer, then of NUPE, now House of Lords.  First past the post was up as it were in a court with witnesses against: Trade union leaders, from right and left, constituencies from around the country and Labour students.

Then there was the choice of people to join what became known, because LCER briefed it as this rather than a working party, the Plant Commission.   We had our Chair, Jeff Rooker MP; the MSF union rep on the NEC, Judith Church.  (The union was in favour of PR but then disappeared into Amicus which then merged with the Transport and General Workers Union to be UNITE).  We also had another Union NEC rep, of TSSA, which is still in favour of PR.  Richard Rosser is now active in the Shadow Labour administration, speaking in the Lords on Home Affairs and Transport.  We also had John Evans MP, put on committees to reliably represent the views of Leader Neil Kinnock and there was former National Agent of the Party, Reg Underhill, who ask it turned out had made a speech for his trades council at a wartime Labour Conference.

They were balanced by Margaret Beckett who in Lincoln remembered fighting Dick Taverne who had left the Labour party after deselection for being pro Europe but stood and won in the subsequent byelection.   Margaret Jackson, one and the same, was to fight him and lose in February 1974 and then beat him the following October.   She was reinforced by the former leader of Norwich Council, the late Baroness Patricia Hollis of Heigham. Unlike Margaret Beckett she attended meetings and was a formidable opponent whereas the only time the Commission saw Margaret Beckett was when she came to the last meeting to vote down a minimalist form of PR.

A quick gallop through the next 30 years brought us a referendum promise in 1997 which had to be defended by LCER, and by that stage Tony Blair for whom this was a matter of trust not systems, at all the subsequent conferences since John Smith had said “let the people decide” when Plant reported.  The promise was broken, long grass followed the Labour Majority in 1997, but not until another Commission had been set up, this time not internal Labour and led by Roy Jenkins which gave us wonderful phrases like “vote mountains” and “electoral deserts”.

The wilderness years for voting reform followed, when LCER was subsumed into Make Votes Count, and when Robin Cook’s warning that the job of government was to prepare for opposition was ignored until 2010 when a coalition was formed between the LibDems and the Conservatives resulting in a referendum against Nick Clegg, which was the 2011 AV Referendum.

We had to wait another second defeat in 2015 to see the rise of voting reform, LCER’s tweeter account, Labour4PR and working with Make Votes Matter.   After two more defeats and a totally unrepresentative Tory government, even of previous Tory governments, with a massive 80 seat majority, the UK is less democratic than in the 1990s.  But the family of electoral reformers inside and outside the Labour Party is stronger than ever working together as Labour for a New Democracy.  Join us. It is only a matter of time but the sooner the better.